Are they embryos or not?

Once again, news about fossils (I promise that I'm not turning this into a paleontology blog).

The Doushantuo Formation in China is one of the most important sites for pre-Cambrian microfossils. These date back to before the Cambrian Explosion of animal life in prehistoric seas, exactly where you'd want to go looking if you were interested in the origins of animal diversity. What's important about Doushantuo is that the fossils recovered are microscopic and preserve fine structural detail, the original cells having been replaced by phosphate minerals.

Many of the Doushantuo microfossils were interpreted as fossilized animal embryos encased within ornamented walls (see image below, via Ministry of Science and Technology, China). If so, they would represent some of the earliest evidence for metazoan (i.e. multicellular animal) life. It is a particularly appealing idea, because they would then pre-date the known adult animal fossils. 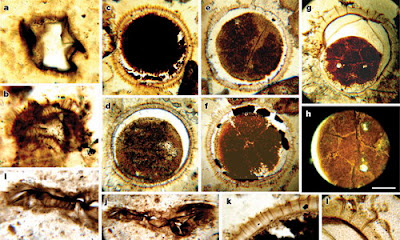 But as always, fossilized forms are notoriously difficult to interpret, especially globs of microscopic spheres. Some others have suggested that they could be giant bacteria, analogous to the modern Thiomargarita namibiensis, which achieves its great size by accumulating nitrate in a big vacuole in the cell, which it uses as a source of energy.

To investigate this hypothesis, one group of scientists decided to go with the approach of experimental taphonomy. Taphonomy is the science that studies the process of fossilization, so essentially what they did was to kill the giant bacteria Thiomargarita and also some sea urchin embryos, and then see what they looked like as they decayed.

Well, that was the plan, anyway. According to their paper (recently published in the Proceedings of the Royal Society, B):

Attempts to kill the bacteria in a consistent manner using strongly reducing conditions induced with beta-mercaptoethanol (BME) were ineffective. ... Consequently, we relied on a decay pathway from the natural taphonomic spectrum in the population.

I.e. "we couldn't kill the bugs, so we fished out the dead ones from the mud instead."

They found that dead Thiomargarita look nothing like the Doushantuo fossils: because of their internal vacuole, they collapse readily. And so it seems that the "giant bacterium" theory is quite unlikely.

But does that mean that they're embryos? Another research group (sharing at least one team member as the previous group), this time publishing in Science, claims that they aren't, based on the patterns of cell division that they found by peering into the fossils using X-ray tomographic microscopy. (Blog post on Scientific American)

Reassuringly, they found structures that they interpret to be eukaryotic cell nuclei within the compartments. It's worth quoting their "criteria for biogenicity" to appreciate the reasoning that goes on "under the hood":


The nucleus-like bodies fulfill relevant criteria for biogenicity: Their occurrence is consistent and repeated (12 of the 14 specimens have one such body in each cell); they are regularly positioned in the cells within any single individual (central to the cells in four of the specimens, peripherally in the others); they have a consistently globular shape; and the volumetric ratio between bodies and cells corresponds to that of nuclei and cells in eukaryotes (fig. S6 and table S1). Furthermore, one specimen (Fig. 2 and fig. S1, D to H) has two elongated and one dumbbell-shaped nucleus-like body, suggesting that they are in the process of division.

In an observational science, as opposed to an experimental science, like paleontology, the standard of proof (to borrow the legal term) is more akin to "preponderance of evidence" (used in civil cases) than "beyond a reasonable doubt" (used in criminal cases). This is not to criticize the validity of their work, but just a comment on the practical limits of knowledge.

But the pattern of cell division that they observed wasn't like metazoan embryos. Embryos undergo a period of "palintomic division", where the overall size of the cell mass doesn't change but is simply subdivided into more and more cells. At some point, however, morphogenesis takes over and higher-order structures such as epithelial sheets start to form. In these fossils, they found no such differentiation. The pattern they found was instead of further and further undifferentiated cell division, and in some cases protrusions containing lots of small cells. Perhaps these might be propagules waiting to be released into the environment, they hypothesize.

In the title of their paper, the researchers interpret the Doushantuo microfossils to be a kind of "protist". The term is used as a grab-bag for all eukaryotes that are not plants, animals, or fungi. That is to say, they think it's an eukaryote, but don't quite know what kind.  More observations will probably be necessary, and perhaps we may never know what it is.

Yet they're still valuable, because you don't always need to be able to slap a name on something to learn interesting things about it. These microfossils still represent an interesting example of multicellularity. It may or may not be the complex multicellularity exhibited by animals and plants, but it still gives a glimpse into the morphological organization that can be achieved by "simpler" living organisms.