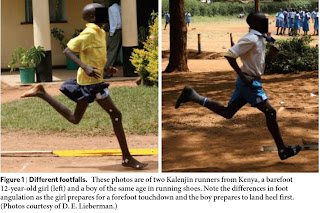 Being a jogger for many years, I have been plagued by knee pains ever since I reached the big 30. As a result, I was intrigued after reading Chris McDougall's book "Born to Run" about the Tarahumara Indians from the Copper Canyons of Mexico, who could run for vast distances in thin leather sandals, even till old age. Much unlike modern runners in their new-fangled running shoes with bells and whistles, and built-in trampolines, but we are still crippled by agonizing sports injuries. Something doesn't adds up!

Prof Daniel E. Lieberman from Harvard University demonstrated quite clearly how the immense shock impact of a heel strike, encouraged by the thick soles of the modern running shoes, could cause shin splints and plantar fasciatis...ouch!

More info could be found in his Nature paper, "Foot strike patterns and collision forces in habitually barefoot versus shod runners", 28 Jan 2010. In this paper, Lieberman compared the foot strike kinetic patterns of US athletes and African runners, in various test groups of either wearing shoes or going barefoot.

I am now in the process of converting to Vibram Five Fingers and forefoot landing, with the training targets of the Army Half in Sep and Singapore Marathon at the end of this year...

I'd love to hear more about the Vibram 5 fingers shoes. Do you think they really make a difference? i would use them for running on pavement or trails.