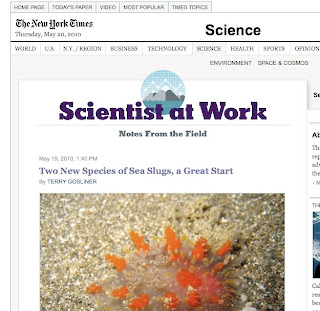 Science! As it happens! The New York Times website has a new blog, called Scientist at Work, the aim of which is, as they put it, "to give scientists in the field a chance to describe what they do as they are doing it."

Of course most day-to-day science is abysmally boring. It's interesting to think about science and talk about it, but to actually watch someone carry out a hundred PCR reactions or measure the second tarsi of countless pinned beetles for an afternoon is... not very entertaining. So trust the field biologists to jump at the chance to portray themselves as modern-day explorers, as the ones who truly get to see the action. Lots of breathtaking photographs too, such as this latest entry on Philippine nudibranchs written by Terry Gosliner of the California Academy of Sciences.

Don't expect to see too much ink spilled about the months of permit-haggling, visa-stamping, and grant-writing that bracket any field expedition, though. And why should there be, anyway? It doesn't interest the public, and those who would know about the boring bits don't need to be reminded. Even seasoned scientists and naturalists need to take a step back from the minutiae, every now and then, and reaffirm that what they study is truly exciting and awesome.
Posted by Brandon at 11:50 am