Spurred by the success of trading card games like Pokemon, biologist David Ng at the University of British Columbia has created a card game called Phylo (also called 'Phylomon' by some), and is soliciting original artwork to build up the deck. The project is consciously tapping into the crowdsourcing and social media phenomena to find volunteers to create content, and it appears to be a great opportunity for the artistically-inclined to contribute. The cards themselves can be downloaded and printed from the website. The site suggests a number of games that can be played, ranging from 'ecological interaction' games to simpler-minded 'X beats Y' games, but as the FAQ notes it's not really meaningful to pit a blue whale against an oak tree and decide which of the two should 'win'. 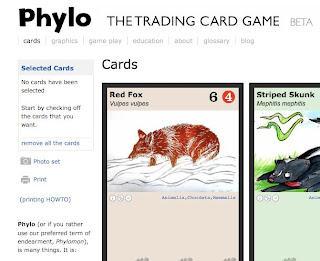 The inspiration for this project was a 2002 letter in Science entitled "Why Conservationists Should Heed Pokemon". In that letter, a group of Cambridge biologists describe a survey of schoolchildren they carried out, handing them pictures of common Pokemon and common British wildlife. They found that the ability to identify wildlife increased moderately with age, but the ability to identify Pokemon rose much faster and in older children exceeded their wildlife recognition skills.

I suppose the biggest problem facing all projects like this is to make it fun without seeming cheesy. Crowd sourcing seems like a promising way to tap into a large talent pool, though uniformity of the artwork and presentation may be lost in the process.

Also, to make a plug for my old lab, there's a similar but more structured card game featuring insects and invertebrates of the Boston Harbor Islands, called PredatOR Prey where the player matches up predators with their potential prey.